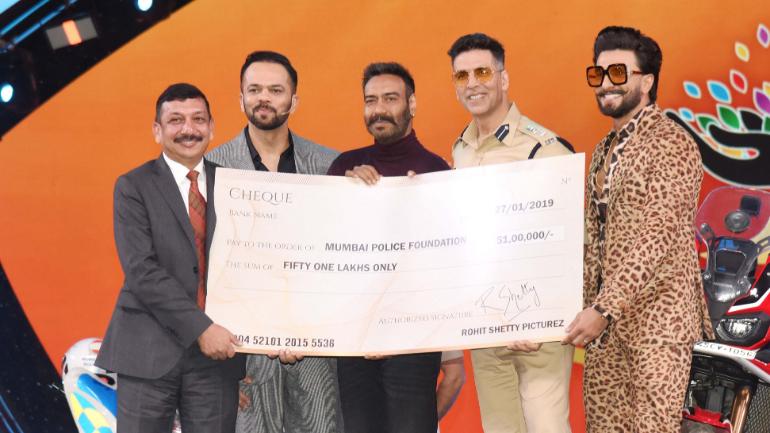 With the huge success of Simmba, Rohit Shetty has proved that he is the king of box office. The film, which crossed the Rs 100-crore mark within few days of its release, now stands at Rs 240 crore, a month after its release. Shetty has not only won the hearts of people with the cop drama, but also the love of Mumbai police at the recently held Umang Awards 2019.

Rohit, who bagged his eighth biggest hit with Simmba, donated Rs 51 lakh from the film’s earning to Mumbai Police at the event.

The filmmaker along with Ranveer Singh, Ajay Devgn and Akshay Kumar handed over the cheque on behalf of his production house Rohit Shetty Picturez to the Commissioner of Police.

Simmba tells the story of Sangram Bhalerao (Ranveer), a cop without sense of morals and scruples. He falls in love with Shagun (Sara), who runs a catering service near his police station. Everything is hunkydory, until the woman he considers his younger sister, 19-year-old medical student Aakruti Dave, gets brutally raped and killed.

After the humongous success of Simmba, Shetty fans are now waiting for his next film, Sooryavanshi with Akshay Kumar in the lead role. The announcement was made in a very special way with Akshay making a cameo at the end of Simmba as Veer Sooryavanshi, chief of the Anti-Terrorism Squad. The text on the screen revealed that Akshay aka Sooryavanshi would be “taking charge in 2019”.

Akshay and Rohit are set to begin the film’s shooting very soon.