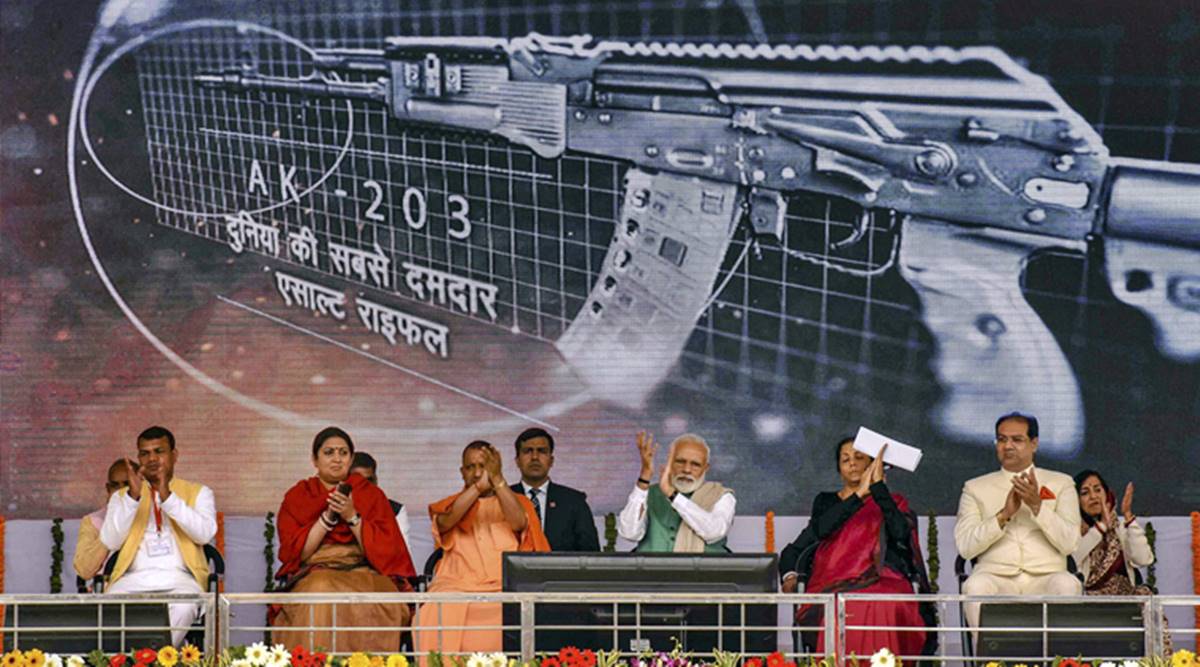 In his first visit to Amethi, the parliamentary constituency of Congress president Rahul Gandhi, after coming to power in 2014, Prime Minister Narendra Modi accused the Congress of “compromising national security”, saying demands of the defence sector were not addressed by previous governments.

Launching a project for the manufacture of AK-203 rifles in Korwa, Modi said the forces would soon use ‘Made in Amethi’ rifles even as he took a veiled dig at Rahul Gandhi, who has repeatedly accused the Centre of failing to create jobs through the ‘Make in India’ initiative.

“One of the most advanced rifles in world AK-203 will be made in Amethi. It will be made by a joint venture of India & Russia. Some people roam all over the world and then say in rallies about ‘Made in Ujjain, Made in Indore’, etc. But now ‘Made in Amethi’ is a reality,” Modi said at the rally, which was attended by Defence Minister Nirmala Sitharaman, Union Minister Smriti Irani and Uttar Pradesh Chief Minister Yogi Adityanath.

Modi, who inaugurated 17 projects worth Rs 538 crore, said the manufacture of AK-203 rifles, a modernised version of the AK-47, should have started 8-9 years ago but earlier governments were least bothered about the armed forces. Around 7.5 lakh units of the latest version of AK-47 will be manufactured here in collaboration with Russia.

“This work should have started 8-9 years ago. Our forces had then made a request to the govt mentioning their needs. This was the reason this factory was sanctioned (in 2010). Those who cannot do this much, how can someone trust them?” Modi said.

This is the second time within a week that the PM has lashed out at the Congress over “ignoring” the defence sector — he had attacked the Gandhi family while dedicating the National War Memorial in New Delhi to the nation last week.

Accusing the Congress of now trying to block India’s purchase of the Rafale fighter aircraft for their “benefit”, Modi said the fifth generation jet would soon be seen in the Indian skies.

“They sat on Rafale deal for years. Now they do not want to see the deal through due to their benefit. But the first Rafale jet will be on Indian sky soon,” he said.

PM Modi’s rally at Amethi is being seen as a fresh push by the BJP to score brownie points in Rahul Gandhi’s bastion. Irani, who unsuccessfully contested the 2014 Lok Sabha election from Amethi against Gandhi, has been regularly visiting the constituency, announcing projects and schemes for the region.

“We might have lost the elections here but we won your hearts. In the last 5 years, Smriti ji has worked so hard for the development of this region. She never made you feel whether you made her win or lose, she worked more than the person who won here,” said Modi.

Referring to the Balakot airstrike, Adityanath said that the Swacch Bharat mission had now been taken to Pakistan. “With Prime Minister Modi at the helm, anything is possible,” he said.