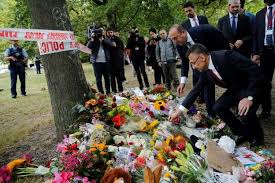 Maheboob Khokhar, 65, who was killed in New Zealand’s Christchurch attack, was supposed to return to Ahmedabad on Saturday, his family members said on Sunday, the day the Indian high commission in New Zealand confirmed death of five Indians in the mosque attack had left 50 people dead.

Of the deceased, three were from Gujarat and one each from Telangana and Kerala. In a tweet, the high commission identified them as Maheboob Khokhar, Ramiz Vora, Asif Vora, Ansi Alibava and Ozair Kadir.

Khokhar, a retired employee of Gujarat Electricity Board, would never miss offering namaz at their Makkarnagar society mosque in Juhapura area of Ahmedabad and continued the practice even when he visited his son Imran Khokhar in Christchurch who has been working in New Zealand for over a decade now, said Hafiz, Khokhar’s son-in-law.

As usual, Imran had gone to park his car after dropping his father at the mosque when Khokhar fell victim to indiscriminate firing by the gunman.

“The couple (Khokhar and his wife Akhtar Begum) was scheduled to leave for Ahmedabad the next day (Saturday),” said Hafiz, Khokhar’s son-in-law.

“We were expecting him to join us in namaz from Sunday. His sudden death has come as a big shock. We never thought that he would not make it back,” said Khokhar’s friend, who did not want to be identify.

The other two victims of the massacre, Asif Vohra and his son Rameez, a father-son duo from Vadodara were declared dead on Saturday.

“Most of their close family members have migrated abroad. The Gujarat government has requested the New Zealand high commission to grant visa to Mohsin, Asif’s’ brother, and relatives of Rameez’s wife, on a priority basis,” said Vadodara MP Ranjan Bhatt.

According to reports, Rameez’s wife had delivered a baby girl only a few days ago. She was to be discharged from the hospital on Friday.

Asif and Rameez had decided to complete the discharge formalities after attending prayers at the mosque, the report said. Asif and his wife had gone to New Zealand just a month ago to welcome the new member of the family.

Hyderbad’s Mohammad Farhaj Ahsan, 30, who succumbed to his injuries in a Christchurch hospital on Friday night, had migrated to New Zealand six years ago after getting a job as an electrical engineer.

His father Mohammad Sayeeduddin said he had gone to the mosque to offer Friday prayers and was missing after the shooting. “He had taken his wife and kids with him a couple of years ago,” he said.

His brother Kasim Khan, who described Ahsan as a bright student, said they will be leaving for Christchurch on Sunday night.

The family of Kerala’s Thrissur-based Ancia Alibava, who was killed in the attack, said her husband Abdul Nazar had a miraculous escape as he was able to hide behind one of the walls in the men’s section of the mosque.

She was in the women’s section. Her family will be leaving for New Zealand to bring her body to their village Kodungallur.

Khursheed Jahangir, brother of Ahmed Iqbal Jahangir, another Hyderabad resident, who was being shot and currently recovering, said he too would be travelling to New Zealand. Jahangir, a resident of Amberpet area went to New Zealand about 15 years ago. He runs a restaurant offering Hyderabadi cuisine next to Al Noor Mosque, where the shooting took place.

Meanwhile, Mohammad Shamim Siddiqi, another victim from Jamshedpur, is reported to be out of danger. Siddiqi’s brother-in-law, Shamsul Hassan, said his sister Rehana Parveen had informed them that another operation would be performed to remove a bullet in next few days.

There are about 20 million Indians is New Zealand, according to Indian High Commission website.