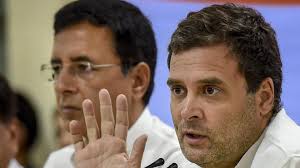 The Bharatiya Janata Party on Tuesday took a swipe at the Congress after the party clarified that that the minimum income guarantee poll promise will “not be a top-up scheme”. The BJP has alleged that the Congress is “misleading” the people with its promise to give money to bottom 20 per cent among the poor Indian households.

The BJP posted a video showing sound-bites from Monday’s press conferences of Congress president Rahul Gandhi and party spokesperson Randeep Surjewala to call it a “vote-face” by the party over the promise of minimum income guarantee poll promise.

Saying that the Congress did a U-turn in 24 hours, the BJP wrote on Twitter: “Classic Congress style volte-face within 24 hours. They are misleading the people of this country and can never be trusted.”

Gandhi has called his party’s promise of implementing the minimum income guarantee scheme “the Congress’s surgical strike on poverty” amid criticism by the BJP. At a public rally in Rajasthan, Gandhi on Tuesday, reiterated his poll promise saying that if voted to power in 2019 Lok Sabha polls, the Congress will eradicate poverty from India.

The proposed minimum income guarantee scheme is targeted at poorest 20 per cent of Indian families by giving them Rs 6,000 a month. Named as NYAY (Nyuntam Aay Yojana) meaning justice, would cover 5 crore families or 25 crore people.

The scheme, if implemented, is expected to cost Rs 3.6 lakh crore or around 2 per cent of India’s GDP.