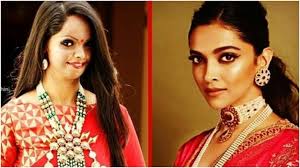 The actor plays an acid attack survivor called Malti in the film, the first look of which was shared a few days ago. Deepika shared a boomerang video of herself in her instagram stories to share her happiness.

The actor can be seen jumping with excitement outside her vanity van in the video.

Deepika is seen with a disfigured face in the first look of the film. The actor had shared it with the caption, “A character that will stay with me forever…#Malti.”

Chhapaak is being directed by Meghna Gulzar of Raazi fame and is based on the life of acid attack survivor Laxmi Agarwal. Several Bollywood stars and Laxmi herself had praised her look.

Deepika’s husband Ranveer Singh was among the first ones to comment on the look. He reacted, “Astonishing! What a remarkable prospect! Proud of you baby! I love you! Go get ‘em!” Her Bajirao Mastani co-star Priyanka Chopra had called it “Amazing” whereas Parineeti Chopra had commented in astonishment, “ARE. YOU. SERIOUSSSS. Love ittt @deepikapadukone.”

Many celebrities and fans called her beautiful and said “can’t wait to watch it”. Jacqueline Fernandez had called her transformation, “unbelievable”. Rajkummar Rao had commented on the picture, “This is so inspiring. Malti is beautiful. Can’t wait to meet her on 10th jan.”

Rangoli Chandel, actor Kangana Ranaut’s sister and a real-life acid-attack survivor also hailed the actor for her effort. She wrote, “No matter how unfair and unjust the world is we musn’t reflect what we hate, this is commendable on @deepikapadukone and @meghnagulzar part, being an acid attack survivor I pledge to be their biggest cheerleader #Chhapaak.”

Chhapaak also stars Vikrant Massey as the male lead opposite Deepika. The film is also her debut production and is set to hit theatres on January 10 next year.