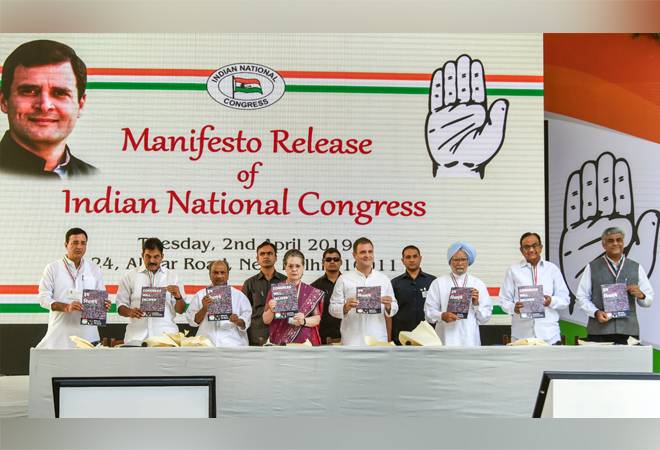 But promises like these come with a price tag. The higher the cost, the more the financial burden on the Indian economy. So, here’s a quick look at some of the poll promises and the money needed to fulfill them:

Congress has promised a minimum income of Rs. 72,000 to the 20 per cent poorest families of India. The amount will be transferred to the women in the household, as per the scheme. The Congress said the scheme was doable as various top notch economists were consulted before announcing the scheme. The scheme if implemented will have a far reaching implications not just for India’s poor, but also the country’s economy.

At Rs 72,000 per annum to the poorest 5 crore families in the country, the Congress proposal will cost Rs 3,60 lakh crore annually. Congress has disclosed that in the first year, the cost of this scheme will be close to 1 per cent of the GDP, which will increase to 1.5 per cent, from the second year.

The minimum salary offered to a central government employee after implementation of 7th pay commission is Rs 18,000 which amounts to an annual package of Rs 2.16 lakhs. Filling up all 4 lakh vacant position in the central government as promised in the Congress manifesto would cost a bare minimum of Rs 8,640 crores annually to the exchequer. Filling up another 20 lakh jobs at state level will cost a lot more.

Congress manifesto thus puts an additional burden of around Rs 10 lakh crore on the Budget. Given that India’s budgeted expenditure for 2019-20 is barely Rs 27.84 lakh crore, the Congress proposals appear profligate.

Assume the government of India’s earning continues to grow at 12-14 per cent per annum from the Rs 24.57 lakh crore in 2018-19, that would still be just about Rs 45 lakh crore by 2023-24. Of that, by the time the next government ends its 5-year tenure in 2023-24–if it’s a Congress government–it will be required to spend around Rs 10 lakh crore annually on its new schemes. That’s not going to be possible since the Centre’s current expenses towards increments to employees, interest payouts, escalation on infrastructure projects and social schemes is already growing at a rate faster than its income.