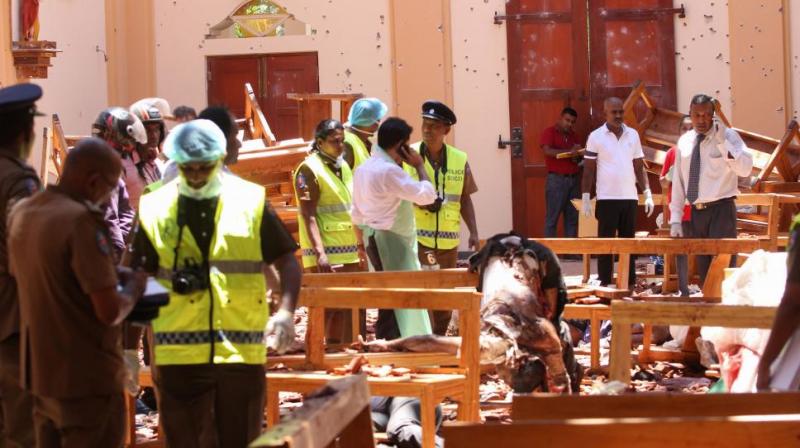 The death toll from attacks on churches and luxury hotels across Sri Lanka rose significantly to 290, and about 500 people were also wounded, police said on Monday.

Five Indians were among those killed in the bombings in Sri Lanka, confirmed EAM Sushma Swaraj on Monday.

At least 290 people were killed, among them dozens of foreigners.

Sri Lankan police have arrested 13 men in connection with bomb blasts on churches and hotels that killed more than 200 people, officials said Monday.

An improvised bomb discovered at the main airport in Colombo was defused late Sunday, police said.

A nationwide curfew imposed on Sunday shortly after the blasts was lifted early Monday, with AFP journalists reporting a steady stream of people and tuk tuks on the streets of Negombo.

There was still a heavy security presence at the city’s St Sebastien’s Church, the scene of one of the devastating blasts.

Sri Lanka’s small Christian minority — just six percent of the 21 million-strong population — has been targeted by violence in the past, but never to such brutal effect.

There was no immediate claim of responsibility, but police said Monday 13 people had been arrested. The government earlier said investigators would to look into whether the attackers had “overseas links”.

The powerful blasts — six in quick succession and then two more hours later — wounded around 450 people.

At least two of the explosions involved suicide bombers, including one who lined up at a hotel breakfast buffet before unleashing carnage.

Japan’s foreign ministry said one of its nationals was among the dead.

The churches targeted included the historic St Anthony’s Shrine in Colombo, where the blast blew out much of the roof.

Bodies lay on the floor of the church, covered in patterned scarves and white sheets, some of them stained with blood.

Shattered roof tiles and shards of glass littered the floor, along with chunks of plaster blasted from the walls by the explosion.