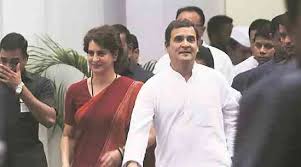 WITH ITS senior leadership unable to arrive at a consensus on Rahul Gandhi s replacement, the Congress Working Committee (CWC) is unlikely to meet this week to appoint a new party president. But amid the chaos and uncertainty, a murmur is now gaining ground in the party for AICC general secretary Priyanka Gandhi Vadra to take charge.

Congress leaders have, so far, not pushed her name openly because Rahul Gandhi, while conveying his decision to step down at the CWC meeting on May 25, had said that the party should find someone other than a member of the Gandhi family for the post.

But many people are saying now. I, too, believe Priyankaji should become the Congress president. She belongs to the Gandhi family. She is a leader and has the quality to lead the party. She is dynamic, former Union minister Sriprakash Jaiswal told The Indian Express.

Three-time former Lok Sabha MP Bhakta Charan Das said millions of leaders of the Congress party, from grassroots to the top, will demand Priyanka ji in the absence of Rahul Gandhi .

In fact, they are demanding. It is not reaching the appropriate place. But everybody wants it. Along with her, a credible team should be there, and we should deliver. I strongly feel that if Rahul Gandhi does not take back his resignation, Priyanka ji should become (party chief) and the party should propose her name, Das told The Indian Express.

This push for Priyanka, however, comes at a time when senior leaders fear that she may not have the kind of acceptability in the party that her brother still has. Sources said many leaders did not take kindly to her uncharitable remarks at the CWC meeting in May.

Party leaders said that during the meeting, while leaders were trying to convince Rahul to not quit in a hurry, Priyanka said that those who murdered the party were sitting in the room. This, they said, was the reason why slogans, such as Priyanka lao, Congress bachao , had not been raised.

Asked why Priyanka s name had not come up publicly so far, Jaiswal said: It (her name) will come up. In my view, she would be a good option. Rahul ji had said non-Gandhi…maybe, that is why people are hesitating to say it openly.

Party sources, meanwhile, said a meeting of the CWC is unlikely this week. In the event of a consensus still proving elusive, sources said the CWC may consider accepting Rahul s resignation and opt for internal elections to pick a replacement. At the same, they said, it may empower the party s general secretaries and state in-charges to take decisions during the interim period.

Many leaders, however, are of the view that it is time the party gets its act together. Enough delay has happened. We should find a leader who is acceptable to everyone. And the leader should have a positive imprint in the minds of every worker and voter. Age should also be a factor. Age and popularity both. The next Congress president should not be very old. And that person should be hardworking just like Rahul Gandhi was, Das said.

Amid speculation over several candidates, he said the post should not be one that has no value . It should have a positive, constructive value from the political point of view. And who possesses that quality… to some extent, Jyotiraditya Scindia. Young people see him as a potential person. And to some extent, Sachin Pilot. There are other hardworking people in the field. But they are yet to be identified, Das said.

Priyanka ji joined the Congress and took up the responsibility, and there was hope among people. People responded throughout India. In my view, Rahul Gandhi should not have resigned. Because we had no other option than him. What the BJP wanted is to isolate the Gandhi brand. To get rid of the Modi brand, the Gandhi brand is needed, he said.