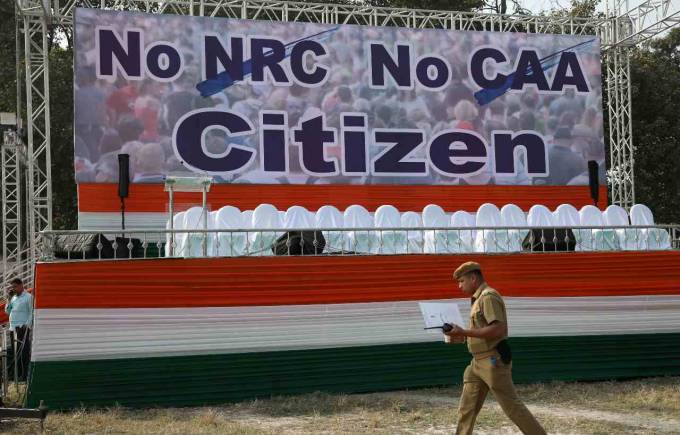 Stressing that a process like the NRC exacerbates “climate of xenophobia” while fuelling religious intolerance and discrimination, a joint resolution by five political groups in the European Parliament said that the Citizenship (Amendment) Act [CAA] is “discriminatory in nature and dangerously divisive” and it appeared to undermine India’s commitment to equality before the law.

This strongly worded joint resolution has been drafted by five political groups from the Centre-Right to far-Left, and will replace the five separate resolutions by these groups.

The sixth resolution, which backs India on CAA, but condemns the use of excessive violence, stays.

These two resolutions will now be debated on Wednesday in European Parliament, and will be put to vote on Thursday.

The joint resolution also mentioned the issue of freedom of expression in India and named some of the activists, including Akhil Gogoi and Sadaf Jafar, who had been arrested for opposing CAA and NRC.

It also warned against the “increasing nationalism which has resulted, inter alia, in fuelling of religious intolerance and discrimination against Muslims”.

The resolution said several Indian states have already announced that they will not implement the law and the Kerala government, in its petition to the Supreme Court, “called the CAA ‘a violation of the secular nature of the Indian constitution’ and accused the Indian Government of dividing the nation on religious lines”.

It also made a strong mention of “protests that broke out around India, particularly on university campuses, in response to the adoption of the CAA were met with a brutal crackdown by security forces, resulting in at least 25 people being killed, 160 injured and thousands arrested.”

Mentioning UP, it said, “Indian authorities have also used internet shutdowns and placed limits on public transportation to prevent peaceful protests; whereas reports have emerged of hundreds of protesters being beaten, shot at or tortured, in particular in Uttar Pradesh; whereas the Indian authorities have also restricted internet access in many areas of the North East and of Uttar Pradesh, where a large proportion of Indian Muslims reside; whereas shutting down internet communications is a violation of the fundamental right to access information”.

It said the CAA was enacted amid the Indian Government’s push for a nationwide citizenship verification process, the National Register of Citizens (NRC); whereas the government’s statements indicate that the NRC process aims to strip Muslims of their citizenship rights while protecting those of Hindus and other non-Muslims; whereas most likely only Muslims who are not included in the NRC will have to appear before the Foreigners’ Tribunals that have been established to determine the right to citizenship; whereas these tribunals have been internationally condemned for failing to protect the right to a fair trial and human rights guarantees; whereas this exercise was recently concluded in Assam, resulting in the exclusion of more than 1.9 million people who were labelled ‘illegal’ migrants and who may now be detained in newly built detention camps or deported; whereas these processes may exacerbate the climate of xenophobia, while fuelling religious intolerance and discrimination in the country.

At present these groups are meeting and negotiating on a joint text, and they will vote on this around 11.30 Central European Time (4 pm IST) on Thursday.

This is a “non-legislative text” and primarily represents the European Parliament’s view on this matter. It is not linked to any current European Union (EU) legislative measure.

Distancing itself from the MEPs’ move, the EU had on Monday stated that opinions expressed by the European Parliament and its members “do not represent the official position of the European Union”.

The joint resolution stated: “Under the current government [in New Delhi] there has been an increased crackdown on the rights to freedom of expression, association and peaceful assembly, including jailing of peaceful critics on charges of sedition, criminal defamation or terrorism; whereas the Indian authorities conducted several raids in 2018 and 2019 on the homes of activists and academics who have been vocal critics of the government and outspoken on human rights, specifically in relation to CAA; whereas the human rights defenders arrested include Akhil Gogoi, Dharjya Konwar and Bitu Sonowal; whereas Manash Konwar, Lakhyajyoti Gogoi, Mohammad Faizal, Sadaf Jafar, Pawan Rao Ambedkar, Anoop Shramik, Robin Verma and Mohammad Shoaib have been released on bail, but an investigation into their cases is still pending”.

It recalled that the strategic partnership between the European Union (EU) and India is based on the “shared values of democracy, the rule of law and respect for human rights”, and “deeply regrets the adoption and implementation of the CAA, which is discriminatory in nature and dangerously divisive”.

It called on Indian government to immediately respond to citizens’ petitions as required by the Supreme Court; “further calls on the Government of India to engage with various sections of the population in peaceful dialogue and to repeal the discriminatory amendments, which violates India’s international obligations.

Calling on the Indian government to address the “legitimate concerns” raised over the NRC, it said they are “worried” that the NRC marks a “dangerous shift” in the way citizenship will be determined in India, and may create a “large-scale statelessness crisis” and cause immense human suffering.

It also “condemned the violence and brutality that broke out in different regions of India following the adoption of the CAA; recalls the special responsibility of law enforcement services to show restraint and allow peaceful protest; calls for a prompt and impartial investigation into the events; calls on the Indian authorities to immediately and unconditionally release the protesters and human rights defenders currently held under arrest”.

It condemned the decision of the Indian authorities to shut down internet access to global networks, preventing communication and the free flow of information; underscores that such actions are a “clear violation” of the freedom of speech.

The joint resolution called on the Indian authorities to cooperate proactively with all special procedures of the UN Human Rights Council; urged them to cooperate in particular with the UN Special Rapporteurs on minority issues, on contemporary forms of racism, racial discrimination, xenophobia and related intolerance, and on freedom of religion or belief.

It called on the EU’s Vice President or High Representative Josep Borrell to continue a constructive dialogue with India on all aspects of cooperation, including political and human rights; called for EU and member-state representations in India to include the issue of ethnic and religious minorities’ discrimination in their ongoing dialogues with the Indian authorities, and to prioritise programmes that address discrimination against ethnic groups and religious minorities, including in areas such as education, and programmes that have a particular focus on discrimination against minorities.

The resolution has been signed by the Centre-Right European People’s Party (PPE) Group – the largest with 182 MEPs, second largest grouping — Group of the Progressive Alliance of Socialists and Democrats, or S&D group, with 154 MEPs, which is the leading Centre-Left political group in European Parliament.

Other signatories include liberal Renew Europe Group, with 108 MEPs, the Verts/ALE Group (the Group of the Greens/European Free Alliance), which is the fourth largest group with 74 MEPs from 16 countries, and the European United Left/Nordic Green Left Group of 41 MEPs.

The European Conservatives and Reformists (ECR), which is a Eurosceptic, anti-federalist group with 66 members, is supportive of the CAA. It notes that the Indian government had explained the “rationale behind the amended legislation” and that India, as a sovereign state, is “free to be the sole determinant of its legislation on who can be granted Indian citizenship”.

However, it condemns “any excessive use of force by security forces against demonstrators protesting against the CAA”.