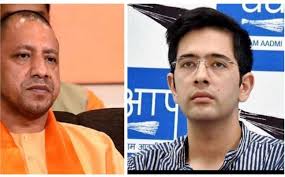 The FIR was lodged in Noida based on a complaint filed by advocate Prashant Patel.

Chadha, in a Twitter post, alleged that migrants travelling Delhi to Uttar Pradesh are being thrashed on the orders of Yogi Adityanath.

“According to sources, Yogiji is getting migrants going from Delhi to UP beaten up. He is saying why did you go to Delhi and you will not be allowed to go to Delhi again. My appeal to UP government is not to do this and not to increase problems in this difficult hour,” he tweeted.

An unprecedented mass migration of laborers and daily wagers from the country’s urban centers to their rural hometowns has seen State governments and the Centre  either try to convince the migrants to stay back in cities like Delhi or facilitate a safe journey home that doesn’t lead to more potential virus spreading.