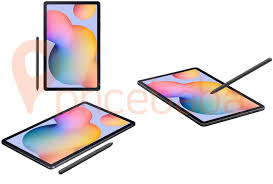 After countless rounds of leaks and rumours, Samsung’s Galaxy Tab S6 Lite has finally been made official by the company. The tablet was unveiled to the world as it saw itself being listed on the company’s official portal for the first time.

Listed on the Indonesian page of the company and third-party retailer Argos in the UK, the Tab S6 Lite has been revealed to come in three new colour options called Chiffon Pink, Oxford Gray and Agora Blue. Apart from this, the official listing also reveals a number of key details about the device.

Talking about the hardware, the Tab S6 Lite has been revealed to bring a 10.4-inch 2000×1200 LCD touchscreen with S Pen support. Underneath the hood, there is an Exynos 9611 SoC that is now increasingly being seen on a number of mid-segment and budget devices from Samsung.

This has been paired with 4GB of RAM and 64GB of expandable storage. There is also a variant with 128GB of storage. For connectivity, the tablet gets either an LTE version with GPS or a Wi-Fi-only iteration with NFC and Bluetooth. The tablet will also feature an 8-megapixel camera at the back, with a 5-megapixel lens also available for clicking selfies.

Interestingly, both listing don’t confirm the availability date for the Tab S6 Lite. But with the device now already up on the Indonesian page of the company, we shouldn’t be too far away from an official announcement about the price too.