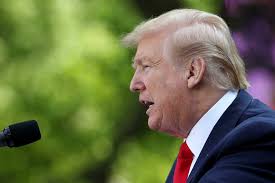 President Trump has been bullish about a coronavirus vaccine — so much so that experts have had to talk him off a more aggressive timeline for it. But on Friday, Trump seemed to shift his rhetoric on the topic, saying we don’t even need one for the virus to go away. “I just rely on what doctors say,” Trump said when pressed.

Except that’s not what his coronavirus task force doctor, Anthony S. Fauci, says. Trump offered his new comments about the potential vaccine Friday afternoon at the White House. “I feel about vaccines like I feel about tests: This is going to go away without a vaccine,” Trump said. “It’s going to go away, and we’re not going to see it again, hopefully, after a period of time.”

Trump said that there could be “flare-ups,” including in the fall, but that it would go away regardless. “There are some viruses or flus that came and they went for a vaccine, and they never found the vaccine,” Trump said. “And they’ve disappeared. They never showed up again. They die, too, like everything else.”

The question is will we need a vaccine. At some point it’s going to probably go away by itself. If we had a vaccine that would be very helpful.” Fauci, though, has said we need a vaccine. A few weeks ago, Fauci was asked on Fox News about comments Joe Biden had made, that “this isn’t going to be over until we have a vaccine.”

Fauci responded: “There’s truth to that. It’s not going to be over to the point of our being able to not do any mitigation until we have a scientifically sound, safe and effective vaccine.” A week earlier, at a White House briefing, Fauci was asked whether we will “truly get back to normal in this country before there’s an actual vaccine that’s available to everybody.”

Fauci said we wouldn’t. “If ‘back to normal’ means acting like there never was a coronavirus problem, I don’t think that’s going to happen until we do have a situation where you can completely protect the population,” Fauci said.

While the question was specifically about a vaccine, Fauci’s answer seemed to allow for the alternative of a very effective treatment. But Fauci said of the question about the vaccine, “You’re absolutely right.”

“I mean, if you want to get to pre-coronavirus, you know, that might not ever happen in the sense of the fact that the threat is there,” he said. “But I believe, with the therapies that will be coming online, and with the fact that I feel confident that over a period of time we will get a good vaccine, that we will never have to get back to where we are right now.”

Trump’s comments also contrast with what he said a few days ago in a Fox News town hall. Trump at the time said the country is in “need” of a vaccine. “And I want it — I need the vaccine,” Trump said Sunday. “We need — this country needs the vaccine. And you’re going to have it by the end of the year. I firmly believe it. I may be wrong.”