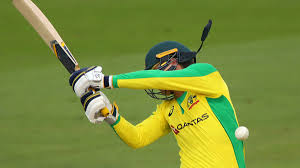 Alex Carey enjoyed a prolific day with the bat with 157 runs, including a century, across Australia’s pair of T20 warm-up matches while Marnus Labuschagne pushed his claims for a T20I debut with a 51-ball 100 at the Ageas Bowl.

Ahead of the internationals beginning on Friday, the Finch XI and Cummins XI played each other twice with Carey (107 off 60 balls) and Labuschagne, who has only played 10 T20s with a high score of 28, combining for a ferocious 181-run stand from 16 overs in the second of the two games as the Finch XI piled up 229 for 3.

During his century, Carey was struck on the helmet by a bouncer from Pat Cummins which dislodged the stem guard.

“We’ve got some immensely good top-order players so for me it was just about making sure I score runs in any game, you just want to make it an option,” Labuschagne said of his chances of making a T20I debut. “Batting in the middle [order] has been slightly tougher so getting an opportunity at the top gave myself a bit more of a chance and I was able to go on with it.”

Earlier, in the first match of the day, Carey had struck 50 off 43 balls for the Cummins XI but they fell short in a chase after half-centuries from Aaron Finch (53) and Matthew Wade (50) led the Finch XI to 166 for 8.

Ashton Agar and Nathan Lyon made their mark with the ball across the day. Agar struck first delivery in the opening match when he bowled David Warner for a duck (Warner made just 1 in the second match) on his way to 3 for 26. Lyon bagged 4 for 29 in the second contest which included the scalps of Warner and Steven Smith while he also bowled the only maiden of the day.

The uncapped Daniel Sams had a profitable day with five wickets across the two outings.

The second game brought a tally of 17 sixes, half a dozen of which came during a rollicking opening stand of 79 in six overs between Smith and Marcus Stoinis (68 off 37) as he continued the form he showed in the 50-over match two days ago. However, when Smith was beaten by Lyon the Cummins XI couldn’t maintain the huge asking rate.