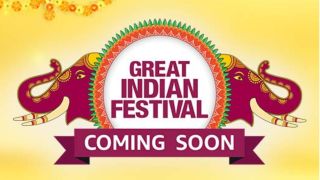 E-commerce giants Amazon and Flipkart have made their intentions very clear as the battlelines have been drawn ahead of the festive shopping season. Amazon has announced the Great Indian Festival Sale while the Flipkart Big Billion Days Sale, and while both say the sales are “coming soon”, there is a slow burn when it comes to revealing the offers, the exclusives and the possible deals you should keep an eye out for. Amazon and Flipkart are keeping their cards close to their chest by simply saying the sales are “coming soon”, with no confirmed dates announced just yet. There are new updates though. The Amazon Great Indian Festival Sale will, among the new launches, feature the upcoming OnePlus 8T 5G smartphone, which is expected to launch on October 14. Flipkart, on its part, has confirmed that there will be deals on smartphones from Samsung, Realme, Xiaomi and Oppo. If you are looking for a new laptop for the work from home routine, Flipkart says some of the best-selling laptops will be listed at up to 60% off during the Big Billion Days Sale.

This year, the Amazon Great Indian Festival Sale and Flipkart Big Billion Days Sale are more important than ever for the ecommerce platforms, for a variety of reasons. First, the financial uncertainty because of the coronavirus pandemic has seen many users hold off on the non-essential spending. Secondly, people may rely heavily on Amazon and Flipkart for this year’s purchases around the festive season as stepping out of home and heading to a marketplace may not be an option for many.

Amazon has given us a sneak peek at what all offers to expect during the Amazon Great Indian Festival Sale. As always, the Amazon Prime members will get to shop with these deals before everyone else. Amazon also says that there will be a 10% instant discount on HDFC Bank credit and debit cards as well as EMI. Amazon says there will be No Cost EMI options as well as exchange offers on smartphones, laptops as well as other electronics and accessories. There will also be similar offers on appliances including TVs for your home. The Amazon Echo, Fire TV and Kindle devices will also have special offers running, including combo schemes, as well as offers on new launches—the new Echo and Fire TV devices are expected to get some offers as they go on sale for the first time.

At this time, you can also out to Amazon Alexa and say “Alexa, what is Great Indian Festival” to know more about the sale and also avail exclusive Alexa deals on accessories and devices such as the Wipro Smart Bulb, the Echo Flex and the Amazon Smart Plug.

Flipkart has also given us a first look at what is in store during the Flipkart Big Billion Days Sale. The Flipkart Plus members will get early access to the sale deals. There will be 10% instant discount on SBI credit and debit cards as well as assured cashback on Paytm, whether you pay from a Bank account or your wallet. There will also be No Cost EMI options from multiple banks, including HDFC Bank, ICICI Bank and SBI.

Flipkart says there will be exchange offers, No Cost EMI and mobile protection plans at Rs 1 on smartphones and tablets during the Big Billion Days Sale. There will be similar offers for laptops, peripherals and accessories as well as TVs. Flipkart’s own brands, including MarQ, will also see products sold with new deals everyday—MarQ for instance has laptops, TVs and appliances in its portfolio of devices. Flipkart will also be offering benefits for those who collect SuperCoins, including the ability to pay for entire purchases with SuperCoins, bonus coins and deals with Rewards Pass.

We really cannot wait to get a closer look at the deals and for the Amazon Great Indian Festival Sale and Flipkart Big Billion Days Sale to go Live. We expect it to be soon, which means you should start saving up for the splurging, now. A good way to start would be by clearing those pending credit card bills!