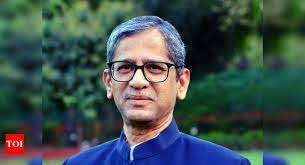 NEW DELHI: President Ram Nath Kovind on Tuesday appointed Justice Nuthalapati Venkata Ramana, the seniormost Supreme Court judge, as the next Chief Justice of India. Justice Ramana will take oath as the 48th CJI on April 24 and will have a tenure of one year and four months.

A staunch advocate of the right to access to justice for the last person in the socioeconomic hierarchy, Justice Ramana was a first generation lawyer born in an agriculturist family in Krishna district of Andhra Pradesh. Leaving behind his student activist days, he had briefly experimented with journalism by working in a leading Telugu newspaper before choosing to become an advocate.

He was appointed as a judge of Andhra Pradesh HC in 2001, as chief justice of Delhi HC in September 2013 and an SC judge in February 2014. Asoft-spoken person, Justice Ramana has given many important and hard-hitting judgments, including the ruling on providing 4G internet services in Jammu and Kashmir, where the government had suspended high-speed internet servi ces after scrapping the state’s special status under Article 370.

The Justice Ramana-led bench’s ruling that “access to internet” is a fundamental right of citizens found many admirers for him and the SC. As the new CJI, Justice Ramana will face many challenges.

After the Covid-19 pandemic disrupted physical hearings and displaced a sizeable population from their workplaces, as head of the National Legal Services Authority, Justice Ramana invigorated the efforts of legal aid authorities across the country to help jail inmates through filing of bail applications, mediating bet ween spouses for amicable settlement of marital disputes and giving the poor required legal assistance.

Though the CJI-designate intends to focus on access to justice for one and all, on his priority list are improving judicial infrastructure, modernising the functioning of courts by use of technology and strengthening the justice delivery system with necessary reforms.

Filling huge vacancies in judges’ posts in high courts and even in the SC are going to be among the difficult tasks that Justice Ramana will have to tackle as CJI before his retirement on August 26, 2022.