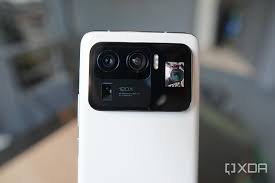 Last year’s Xiaomi Mi 10 Ultra was my favorite slab phone of 2020, but many consumers in the west were left out because it was a China-only release. That makes this year’s Mi 11 Ultra that much more exciting — it’s going on sale throughout Europe and Asia and packs some new never-before-seen camera tech.

About this hands-on: We received a Mi 11 Ultra from Xiaomi on April 6. Xiaomi did not have any input in this article.

The first thing anyone will notice about the Xiaomi Mi 11 Ultra is the absolutely massive camera module, which isn’t so much a bump but an entire island onto itself. It protrudes out of the device’s ceramic back more so than even the S20 Ultra‘s notoriously large hump. Surprisingly, despite the top-heavy build, the Mi 11 Ultra can still stand vertically on its own due to the flat bottom (the top is flat too).

Much like the Mi 11, the Mi 11 Ultra’s screen is a 3200 x 1440 resolution, 120Hz OLED panel that’s curved on four sides — left, right, top and bottom. To my eyes, the screen looks every bit as vibrant and bright as the Galaxy S21 Ultra’s screen. However, the panel can only switch between 120Hz or 60Hz, which is not as versatile as other recent Android flagships.

Inside the Xiaomi Mi 11 Ultra is a Qualcomm Snapdragon 888 chip paired with 256GB of UFS 3.1 storage and either 8GB, 12GB, or 16GB of LPDDR5 RAM. The 5,000 mAh battery can be charged wired or wirelessly at 67W speeds. From my brief testing, the 67W charging brick (included with the packaging) can add 22% juice in ten minutes.

Back to that gigantic camera island — it’s so big because it packs some top-end, fresh-off-the-assembly-line camera components, and even a weird secondary screen.

This 1.1-inch, 126 x 294 secondary display has two uses (at least as far as I can tell after just a day with the phone): It can serve as a camera viewfinder so the user can take selfies with the main camera system, and the screen can display the time, notifications, and music controls.

I don’t really see much point in controlling my Spotify playlist via the back of the phone, but I can see selfie lovers absolutely loving the ability to take selfies with the main and ultra-wide cameras because they’re very good sensors. Unfortunately, this only works with still photos: the Xiaomi Mi 11 Ultra’s second screen cannot show the viewfinder for videos, so vloggers hoping to be able to see themselves while shooting are out of luck.

Let’s talk about those cameras. There’s the 50MP main camera, which uses Samsung’s brand new ISOCELL GN2 sensor. It features a jaw-dropping 1/1.12″ sensor, easily the largest in the mobile industry right now. The sensor being so large results in natural, creamy bokeh in close up photos.

The ultra wide-angle camera also got a big jump over the Mi 11. It’s now a 48MP ultra-wide lens that can capture 128° FoV, and it’s closer in quality to the main camera than previous Xiaomi phones. This trick — making the ultra-wide angle camera closer in pixel count to the main camera — is one we’ve seen from Huawei, OPPO, OnePlus, and Vivo phones, so it’s good to see Xiaomi also jump on board.

Finally, there’s the Periscope zoom lens, a 48MP sensor that can produce 5x optical zoom and max out at 120x digital zoom. On paper, this zoom lens falls short of what Samsung’s and Huawei’s 10x optical can do, but the actual results are close.Reference shot: 1xMi 11 Ultra, 10x zoomS21 Ultra, 10x zoomMate X2, 10x zoom

Even though the Xiaomi Mi 11 Ultra can get up to 120x zoom, the resulting shots are blurry as is the case with other phones’ max digital zoom. Instead, keep zooming between 5x to 20x if you want to enjoy very usable, sharp images.Mi 11 Ultra, 1xMi 11 Ultra, 5xMi 11 Ultra, 10x

The Xiaomi Mi 11 Ultra runs on MIUI version 12 over Android. The software experience is fast and responsive with whimsical animations. MIUI does, however, still have this one nagging flaw that is particularly problematic here: There is no way to activate one-hand mode if you’re using swipe gesture navigation (it’s only available if the phone is using on-screen navigation buttons).

For other Xiaomi phones, I can make do without a one-hand mode, but the Mi 11 Ultra is a huge phone. I can already picture myself struggling to type with one hand as I’m out around town with a bag of groceries in my other hand.

I have only tested the phone for a day, but I can already tell the Mi 11 Ultra’s 5,000 mAh cell won’t be enough to power the phone all day for me if I set the display to both WQHD+ resolution and 120Hz refresh rate. Today, in just four hours of being out, I drained the phone from 65% to 14%. Now to be fair, I tested the phone heavily over the four hours, recording a dozen videos, snapping 50-60 photos, streaming 30 minutes of Spotify, and setting the screen brightness on max because it was a very sunny day.

At least the silver lining is that the Xiaomi Mi 11 Ultra charges very fast wired or wirelessly, and a 67W charger is included in the box.

There was a lot of hype surrounding the Mi 11 Ultra’s camera, which Xiaomi says was developed in collaboration with Samsung. So far, after a day of heavy testing, the camera seems to live up to its hype. The natural bokeh adds a professional vibe to photos that other smartphones have to artificially create using software (although, to be fair, Google does a fine good job of that with the Pixel phones).

The Mi 11 Ultra’s zoom lens is also the best zoom system Xiaomi has used yet, and can mostly hold its own against Samsung’s and Huawei’s best.

At around €1200 ($1,425) for the 12GB RAM model, the Mi 11 Ultra is Xiaomi’s most expensive smartphone ever, but I think Xiaomi has done enough to justify this premium pricing. There’s not much missing in the Mi 11 Ultra (it even has IP68 water resistance for the first time in a Xiaomi flagship).

In China, the device starts at a cheaper ¥5599 (~$915), but that model only has 8GB of RAM and will run a less polished (for western tastes) Chinese version of MIUI.