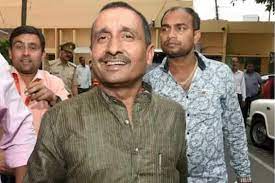 Sangeeta was the Zila Panchayat Chairperson of Unnao from 2016 to 2021.

Bharatiya Janata Party (BJP) declared its list of panchayat poll candidates for five districts that included Sangeeta Sengar, wife of former BJP MLA Kuldeep Singh Sengar who has been convicted in a rape case of a minor.

Sangeeta was the Zila Panchayat Chairperson of Unnao from 2016 to 2021 and has been given a ticket from Fatehpur Chaurasi Tritaya seat for the Zila Panchayat member. Names of 51 candidates were released for different Zila Panchayat wards in Unnao. BJP has fielded outgoing Block Chief Arun Singh from Asoha (second) and Anand Awasthi from Sarsi (first), Anand is also a member of BJP National Executive Committee.

Sangeeta had become the Zila Panchayat chairman from Unnao district in 2016.

Candidates are being declared every day from selected districts. On Thursday, the nominees were declared from Unnao, Mau, Balrampur, Basti and Kushinagar.

As a BJP candidate, Kuldeep Sengar had won the state Assembly polls from Bangarmau Assembly seat of Unnao in 2017. However, the seat fell vacant after he was convicted in the rape case and was expelled from the party.

In 2020, Sengar was sentenced to ten years in jail and fined Rs 10 lakh in connection with the death of the Unnao rape victim’s father. Kuldeep Sengar has denied involvement in the man’s death. He’s already been jailed for life for raping the Unnao victim in 2017, when she was a minor.

The Uttar Pradesh panchayat election 2021 will be conducted in four phases starting April 15, while the results will be declared on May 2.

The UP gram panchayat elections 2021 will be a key test of the Yogi Adityanath-led BJP government’s popularity, and an opportunity for opposition parties to gauge the public mood, particularly as they come against the backdrop of persisting farmers’ protests in the country that have also gripped parts of UP.