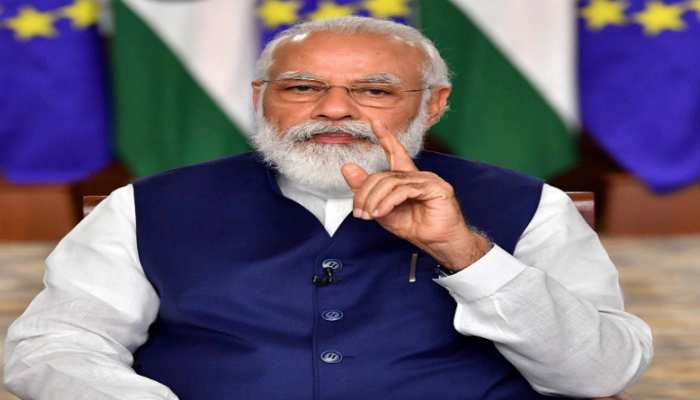 BJP has claimed that at least five of its activists were killed and thousands of houses belonging to the party’s workers were damaged in attacks by TMC supported miscreants.

Concerned over incidents of brutal violence after the 2021 Assembly election results in West Bengal, that claimed several lives and left many injured, Prime Minister Narendra Modi on Tuesday called Governor Jagdeep Dhankhar and enquired about the ‘alarming situation’ in the state.

On Monday, in the wake of post-poll violence and vandalism, the Governor summoned top bureaucrats and asked them to submit an urgent report.

He tweeted, “Reports indicate horrendous state of affairs. Horrified people are fleeing to save themselves. Flooded with SOS appeals. Harmads are on a killing and destruction spree. Such nosediving of constitutional values cannot be countenanced. Call upon @MamataOfficial to restore order. Was constrained to summon ACS @HomeBengal DG @WBPolice Police Commissioner @CPKolkata in wake of post poll violence & vandalism resulting in killings, injuries & destruction of shops and houses. All were called upon to submit reports urgently. Unfortunate no report thus far.”

“Police @WBPolice @CPKolkata must end senseless political violence, vandalism, arson, killings and intimidation that shames democracy. Bengali diaspora world over has expressed concern over alarming lawlessness. Why post poll violence only in WB? Why this assault on democracy?” the Governor tweeted.

On May 2, soon after the results of the Assembly election are out, State BJP leaders alleged many party workers were killed, raped, assaulted brutally and their houses were set on fire across the State. They accused TMC cadres of carrying out the attack and alleged that police are not doing anything to provide them protection.

The Centre also sought a report from the West Bengal government on post-poll violence in the State.

On May 5, the BJP under the leadership of Nadda is also planning to hold nationwide protests against the widespread violence by TMC cadres.

The Union ministry of home affairs (MHA) on Monday said it has sought a report from the Bengal government over reports of this post-poll violence in the state.

“MHA has asked West Bengal government for a report on the post-election violence targeting opposition political workers in the state,” it said in a tweet.

The Trinamool Congress claimed three of its supporters were killed by the BJP, which rejected the allegations, saying the incidents were the result of “people’s resistance”. The incident took place when some TMC supporters were on the way to Nabagram in the Jamalpur police station area on their motorcycles and were allegedly attacked by BJP workers, the sources said.

The TMC said that its members were thrashed and their bikes were damaged. The injured were taken to different hospitals and two were declared dead by Burdwan Medical College and Hospital when rushed there.

A woman who was among the injured was declared dead when taken to Jamalpur Hospital, the sources said. Claiming that the woman was a BJP supporter, local BJP leader Ashish Kshetrapal said that TMC activists descended on the area shouting ‘Joy Bangla’ and ‘Khela Hobe’ slogans around 11 am.

“We built a counter-resistance and the TMC attackers fled. But they returned via another route, forcibly entered my house, and attacked my family members. My mother died in the attack,” he said. The TMC supporters also injured his father and uncle, the local leader said adding they vandalised and looted 17-18 houses in the area.

Poice said 23 people have been detained in connection with the incident and a huge contingent of central forces have been deployed in the area. An officer of Jamalpur police station said the situation was under control. In another incident in Samaspur in Raina police station area, a 55-year-old man was killed in TMC-BJP clashes on Sunday night after the results were declared.

Ganesh Mallick, known in the area as TMC supporter, was injured after being hit by bamboo sticks. He was admitted to the Burdwan Medical College and Hospital where he died, the sources said. BJP district general secretary Shyamal Roy said the incident was a fall out of a family dispute, while TMC spokesperson Prosenjit Das said the saffron party was resorting to violence in various areas after losing the poll.

TMC supporters were also accused of vandalising the homes and shops of BJP workers in various parts of Galsi. In the city a person died after he was severely assaulted by TMC workers in Kankurgachi area late on Sunday night, police said.

The man, who was claimed by his family to have been a BJP activist, was declared brought dead when taken to a nearby hospital, the police said. A few houses in Jadavpur area of the city were vandalised by unknown miscreants, who were alleged to be members of TMC.

BJP has claimed that at least five of its activists were killed and thousands of houses belonging to the party’s workers were damaged in attacks by Trinamool Congress supported miscreants since the declaration of the assembly election result. BJP state president Dilip Ghosh told reporters here that neither the state police nor the administration came to their help.

He claimed that the mother of a booth president was killed during an attack by TMC workers at Jagaddal in North 24 Parganas district and another person was killed at Sonarpur in South 24 Parganas. Another BJP supporter was killed in Beleghata area of the city, while two others were killed in similar attacks at Ranaghat in Nadia district and Sitalkuchi in Coochbehar, he said.

Ghosh said there were reports of the killing of an ISF supporter at Kadambagachhi in North 24 Parganas, taking the toll to six. “It seems after winning unexpectedly TMC activists are venting their ire on opposition workers and their families with the tacit support of the ruling party,” he said.

Ghosh said BJP will approach Governor Jagdeep Dhankhar and Union Home Minister Amit Shah listing details of attacks and also inform the Election Commission. At the same time he offered cooperation to TMC as a “responsible opposition” saying “We also look forward to their initiative in this regard.” He met the governor later during the day.

Reports of post-poll violence were received from Jalpaiguri in north Bengal too. The newly-elected MLA of Dabgram-Phulbari, Sikha Chatterjee of BJP alleged that miscreants supported by the TMC attacked her house. She even took reporters inside her house to show them the destruction caused by the attackers.

She also alleged that houses of BJP workers were vandalised and a vehicle was damaged at Chunabhati area of Dabgram-Phulbari constituency, where state minister and senior TMC leader Gautam Deb was defeated by the BJP. In Moynaguri there were reports of a clash between the two groups at Chuadanga area in which several persons were injured and a motorbike was set on fire, police said.

A number of houses in the area were also vandalised, the police said adding the injured were taken to the hospitals. BJP has claimed that the injured were its supporters and the TMC denied any role in the clash.

Police and central armed police force have rushed to the spot and RAF has been deployed. A large police picket has been posted to maintain peace in the area, an official of the force said.