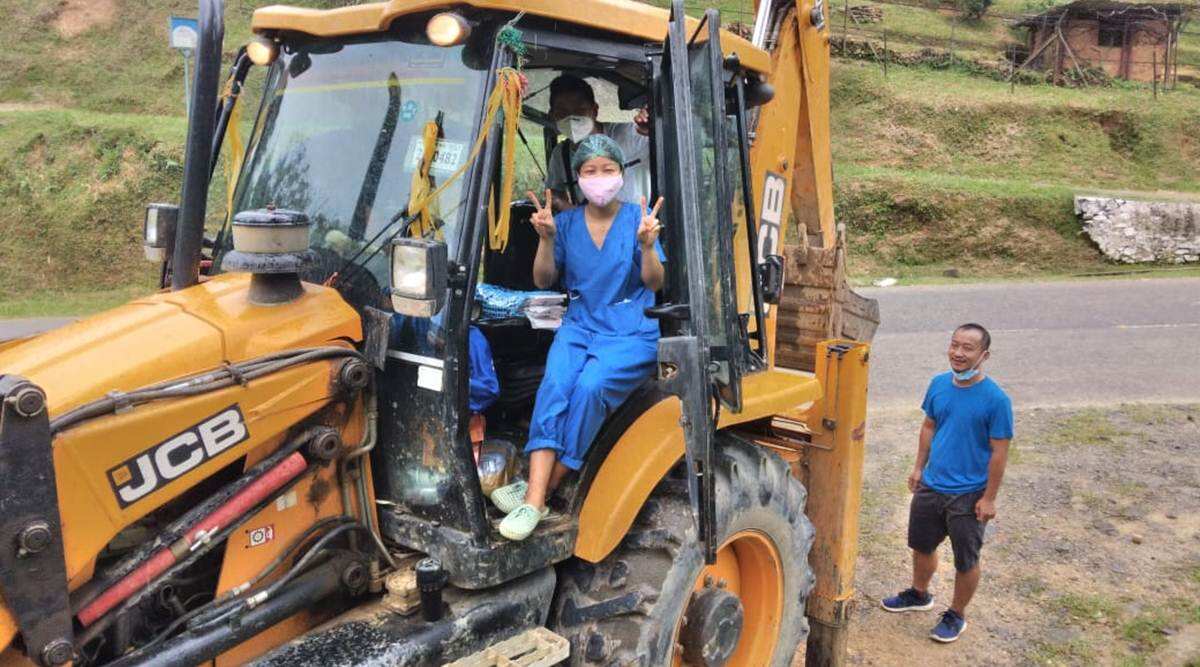 Located around 300 km from state capital Itanagar, Changlang — near the Myanmar border — is largely forested.

A country boat on the Noa Dihing river, a pick-up truck on a dirt road along the Myanmar border, a JCB excavator on a route blocked by trees felled by a storm.

These three pictures tell the story of how the remote Changlang district of Arunachal Pradesh, located on the border of Myanmar, has managed to get 50% of its 18-44 population (total 44,366), and over 90 per cent of its 45+ age group (numbering 20,227), vaccinated with a first dose. A majority of this was done over a three-day-long campaign held by the district administration last week, as part of which a “vaccination challenge” was announced for the 12 health centres under Changlang.

Devansh Yadav, Deputy Commissioner, Changlang, said the idea of the competition was spurred on by the rising Covid cases in the district. With 194 active cases as of June 20, Changlang ranks third highest in the state. “A few weeks ago, the active case load had crossed 400… We realised we had to vaccinate as fast as we could.”

Yadav said they gave medical officers daily targets based on the population in a circle and announced cash awards. “The first prize (for maximum vaccinations in a day) was Rs 2 lakh, the second Rs 1 lakh and the third, Rs 75,000.” The officers could use the prize money to develop infrastructure or meet any requirement at their health centres. “The result was great. Put together the district crossed its target by 200.1%.”

Located around 300 km from state capital Itanagar, Changlang is largely forested. “The district is 4,600 sq km, of which 2,000 sq km is covered by the Namdapha National Park,” Yadav said. Beyond the national park also, lie forests. “It was especially a challenge to go to areas across the Noa Dihing river (a tributary of the Brahmaputra). Most are not connected by bridges,” he said.

On Friday evening, Yadav tweeted three photographs, of health workers on a boat, a pick-up truck and a JCB excavator, with the caption, “Rivers, hills or slushy routes — our vaccination teams on the job!”

A JCB excavator was also used to reach remote villages located close to the Myanmar border, including Ranglum. “There was heavy rainfall, trees had fallen and the roads were slushy. So the excavator was used to clear the road as they progressed,” said Yadav.

Takio Jully, the 25-year-old nurse who rode the JCB, said it was a “novel experience”. “I have been doing vaccinations since April, but never before did we have to travel in a JCB for it,” she said. “It took us two hours to travel about 30 km. When we arrived, even the villagers, who are usually cut off, found it amusing.”

She added that while the people were initially a bit scared, they cooperated after the benefits of the vaccine were explained to them.“Everyone has to get a shot, so we will go anywhere to administer it, even if it involves going on a JCB,” Jully said.

The Innao Primary Health Centre (PHC), which caters to areas primarily inhabited by the Chakma community, had a daily target of 300 and managed to administer more than 900 shots per day, winning it the first prize in the challenge.

Dr Rupa Tangha, Medical Officer of the PHC, said what helped were the outreach programmes they had carried out in the run-up to the vaccination drive. The award money will be used to pay honorariums to workers of the PHC, and meet other needs. “The officials have been working very hard,” she said.

Since everyone participated so enthusiastically, Yadav said, they paid Rs 25,000 each to the other nine health centres as well apart from the three that took the top spots.