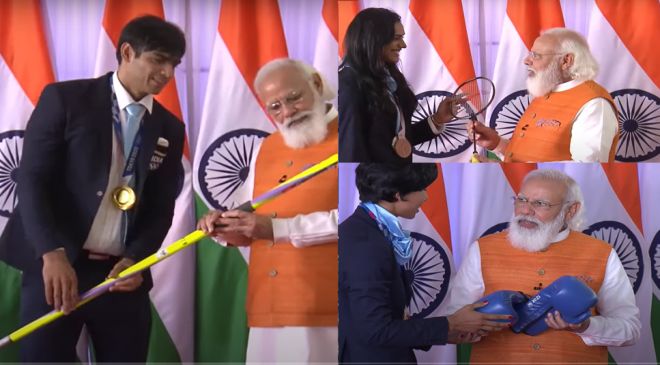 The two events hosted by Prime Minister Narendra Modi for the Indian Olympians and Paralympians recently, which were hailed widely as extremely motivating gestures for the sporting community, are now also proving to be big money-spinners for the public exchequer.

Over 15 items presented by the athletes to the prime minister during these events could now fetch the government over Rs 10 crore as part of the online auction that started on Friday under the aegis of the culture ministry. The biggest draw is the javelin which Tokyo gold medalist Neeraj Chopra had presented to PM Modi and has a starting base price of Rs 1 Crore. There are over 1,200 items on e-auction of the various gifts received by the prime minister lately, but the most expensive ones on this list, with the highest base price totalling nearly Rs 10 crore, are the nearly 15 items that the Olympians and the Paralympians had presented to the PM.

“These items in the end may fetch even more during the auction given the euphoria in the country over the performance of the Olympic and Paralympic contingents and we expect people to bid encouragingly for these items,” a senior government official told News18. The proceeds of this auction will go towards the Namami Gange Mission to clean the Ganga river.

Top on the chart after Chopra’s javelin is the two angavastras (stole) that both the contingents had presented to the PM Modi and each has a base price of Rs 90 lakh. An autographed angavastra was presented by the Paralympians to the prime minister during a breakfast hosted by him to felicitate the contingent while the other is one presented by the Olympians with their signatures. Then, the hockey stick of Indian women hockey captain Rani Rampal also has a base price of Rs 90 Lakh. “The blue coloured hockey stick includes a logo named Rakshak written in white, and the model number is Rani 28, which directly points to Rani Rampal, the captain of the Women Hockey Team of India and 28 is her jersey number. The signatures of the entire Indian hockey team run along the body of the hockey stick,” the description reads.

The sharp-shooting glasses worn by Manish Narwal, who bagged a gold medal in Paralympic games, are up with a base price of Rs 20 lakh while the T-shirt worn by Bhavina Patel at the Paralympic games, where she won a silver, is up for auction at a base price of Rs 15 lakh. The national flag of India is stitched on the left, near the buttons of the t-shirt and the central portion contains a message thanking the Prime Minister.