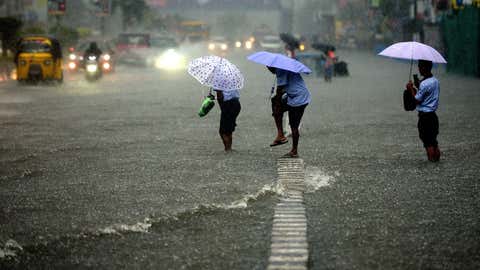 Wind speed in coastal areas would be around 60-80 kmph from Dec 4 afternoon. IMD advised people in affected areas to remain indoors as there is a possibility of landslides in hilly areas.

Bhubaneswar: The  Indian Meteorology Department (IMD) on Thursday (December 2) issued a Red alert for 4 districts, Orange warning issued for 7 districts for heavy to very heavy rainfall in Odisha. It also advised the fishermen not to venture into sea from 3 to 5 December.

Wind speed in coastal areas would be around 60-80 kmph from Dec 4 afternoon. IMD also advised people in affected areas to remain indoors as there is possibility of landslides in hilly areas.

The National Disaster Response Force (NDRF) has deployed eight teams in West Bengal in the wake of Cyclone Jawad. Two teams have been deployed in Kolkata and one each in South 24 Parganas, North 24 Parganas, East Midnapore, West Midnapore, Hooghly, and Nadia. Eight more teams will be deployed by tonight.

Prime Minister Narendra Modi on Thursday chaired a meeting on the cyclone-related situation in the country. The meeting took place after the IMD issued an alert for the formation of a cyclone which is expected to cross the coasts of Andhra Pradesh and Odisha by the morning of December 4, with wind speeds ranging from 90 kmph to 100 kmph, accompanied by heavy rainfall and tidal waves in the coastal districts of these states.

Meanwhile,the East Coast Railway on Thursday (December 2) said it has cancelled operation of 95 trains for three days from Thursday in the wake of predictions of a cyclonic storm hitting the Odisha coast.

As a precautionary measure for the safety of passengers, 95 mail and express trains originating from different places and passing through the region have been cancelled from December 2-4, an ECoR statement said.