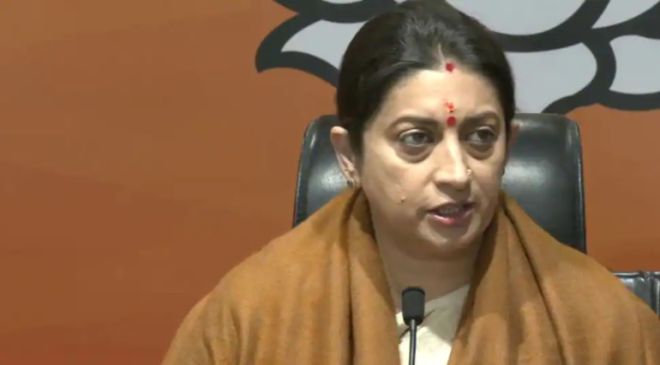 BJP leader Smriti Irani also hit out at the Congress over Punjab Chief Minister Charanjit Singh Channi’s statement that he had also briefed party leader Priyanka Gandhi Vadra about the development and questioned his doing so as the Congress general secretary is a private citizen.

New Delhi: The BJP on Wednesday accused the Congress government in Punjab of deliberately ignoring the security threat to Prime Minister Narendra Modi despite being informed of it by state police personnel, and asked who in the opposition party sought to benefit from the breach.

Union Minister and BJP leader Smriti Irani cited a ‘sting’ done by a new channel which purportedly showed some Punjab Police officials saying that they informed their superiors about protestors blocking the route of PM Modi’s motorcade but no action was allegedly taken.

Addressing a press conference, she said, “What is extremely disconcerting is that Punjab Police officials have highlighted how they continuously engaged with the Cong government and administration in Punjab to bring to light the threat to the security of PM and his route. The question this expose begets who in the Congress-led government in Punjab continued to deliberately ignore these threats to the PM’s security?”

Who sought to benefit in the Congress from the breach to Modi’s security, she asked?

Irani said the then Punjab DGP had given an all-clear message to PM Modi’s security team and wondered as to why he did so. She also hit out at the Congress over Punjab Chief Minister Charanjit Singh Channi’s statement that he had also briefed party leader Priyanka Gandhi Vadra about the development and questioned his doing so as the Congress general secretary is a private citizen.

Why is that private citizen an “interested party” in the matter of the prime minister’s security, Irani asked.

With Channi often taking aim at the BJP over its concerted campaign against him over the alleged security threat to the prime minister, she accused Congress leaders of trivialising such a serious matter.

PM Modi’s Punjab visit on January 5 was cut short as he was stranded on a flyover for 20 minutes due to a blockade by protesters. After the lapse in security, PM Modi’s convoy decided to return without attending an event at a martyrs’ memorial at Hussainiwala. The prime minister also could not attend a rally in Ferozepur.

Channi has insisted that there was no threat to Modi.The Congress has suggested that the decision to cut short the prime minister’s trip was caused by the alleged thin attendance at his rally.

The Supreme Court has constituted a panel to probe the entire incident.