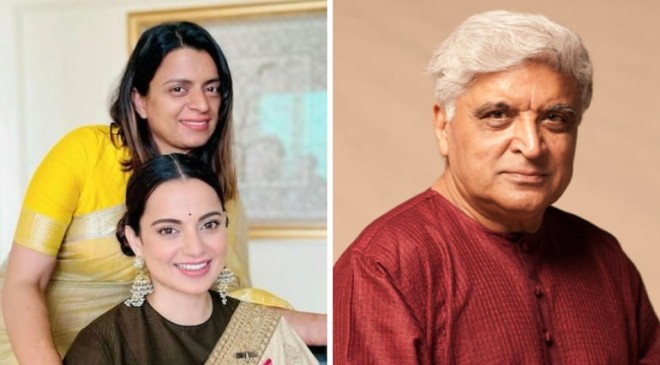 The Magistrate court in Andheri has reserved its order on the application made by actor Kangana Ranaut requesting that her sister Rangoli be summoned to court to depose. The complainant in the case, Bollywood lyricist Javed Akhtar has opposed to this application.

Akhtar had filed the complaint against Ranaut stating that in 2020 she had defamed him on a television channel. Kangana, on the other hand, had said that Javed had no business intervening between her and actor Hrithik Roshan. She said that Javed had called a meeting in March 2016 where he had tried to intimidate her. She, too, has filed a complaint against Javed over the same meeting in 2016 and alleged that Javed was extorting an apology from her.

Kangana’s application filed before the Magistrate court stated that her sister Rangoli had accompanied her to the meeting. Kangana stated that the Magistrate had “failed to record the witness statement of Rangoli which was pertinent to bring the true and correct facts of the case on record.”

Kangana stated that her sister should be summoned to court under Section 311 of Criminal Procedure Code “so that the true and correct facts of the case are put on record.”

Advocate Jay Bharadwaj representing Javed strongly opposed the application while stating that the stage for her witness had not yet arrived. “The evidence in the matter hasn’t commenced until now and as such the application is accordingly not maintainable and like previous applications, the present application, is also moved with the sole intent to delay the proceedings,” said the reply filed by Bharadwaj.

Javed has given a list of witnesses to prove his case of defamation against Kangana. According to Bharadwaj, those witnesses have to be summoned by the court first.

The reply filed by Bharadwaj said, “once the recording of the evidence will commence in the matter at a post-summoning stage (which stage has not yet reached), the Accused (Ranaut) or its witnesses can be examined before this Court. In a similar situation, in the cross-complaint filed by Kangana against Javed, it is incumbent upon Ranaut to bring her witnesses and evidence on record in order to satisfy the Court with respect to its case and more importantly, the complainant will not have a right to produce its witnesses at the stage of pre summoning.

After hearing both sides, the Andheri Magistrate court will be passing an order on the same on Aug 11.