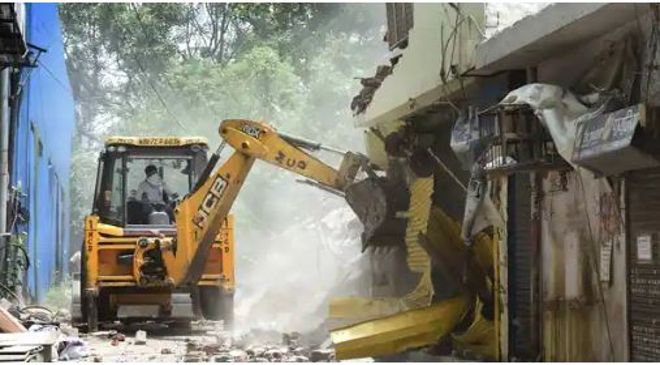 The Delhi High Court on Wednesday said that the DDA officials cannot evict encroachers from their residence with a bulldozer without any notice. Justice Subramonium Prasad, while dealing with a petition concerning the demolishment of several jhuggi jhopris in the Shakarpur area, said that Delhi Development Authority (DDA) has to act in consultation with the Delhi Urban Shelter Improvement Board (DUSIB) and provide temporary shelters to them before embarking on any demolition activities.

“The action of DDA in removing a person, whom they claim to be an encroacher, overnight from his residence, also cannot be accepted,” the Delhi High Court said in its order.

“A reasonable period has to be given to such persons and a temporary location has to be provided to them before embarking on any demolition activities,” said the court.

Referring to an earlier judgment passed by the high court, the judge noted that “it is not uncommon to find a jhuggi dweller, with the bulldozer at the doorstep, desperately trying to save whatever precious little belongings and documents they have, which could perhaps testify to the fact that the jhuggi dweller resided at that place”.

The petitioner Shakarpur Slum Union said that the residents were migrants from Bihar, Uttar Pradesh, and West Bengal and were mainly labourers, rag pickers, rickshaw pullers, auto drivers, and domestic workers and claimed that the DDA ought to have followed the Delhi Slum and JJ Rehabilitation and Relocation Policy, 2015 to rehabilitate and relocate the residents.

The material on record in the present case, the court said, did not show that the jhuggi was in existence prior to 2006 and was thus covered by the rehabilitation policy.

It however does not mean that an unidentified cluster would not be entitled to rehabilitation, the court added.

The court thus directed the DDA to give sufficient time to the dwellers to make alternate arrangements or take steps to accommodate the dwellers in the shelters for at least three months.