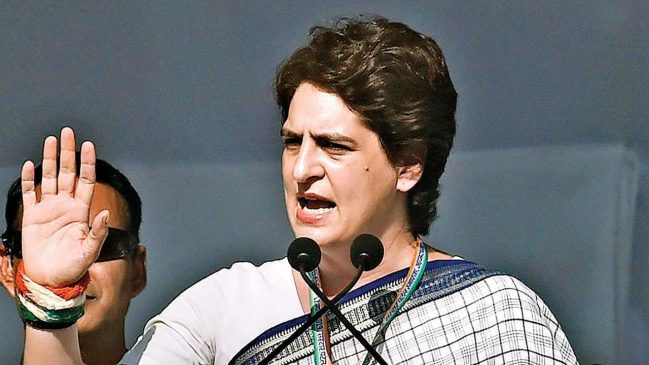 Solan: Congress General Secretary Priyanka Gandhi Vadra will start the election campaign in BJP-ruled Himachal Pradesh on October 14. She is likely to hold a massive rally at Thodo Maidan to sound the poll bugle in Solan. The rally, which was earlier scheduled to be held on October 10, was postponed citing bad weather.

Priyanka is holding the fort for the Congress campaign in the state as Rahul Gandhi is spearheading the massive Bharat Jodo Yatra across the country. Meanwhile, Congress seems confident that Priyanka’s campaign will send a positive message.

AICC secretary Raghubir Singh Bali said, “Himachal Pradesh is Priyanka Gandhi’s second home. She comes here about every three months. Her presence will create enthusiasm and spirit among the workers and send a positive message to the entire state.”

Himachal Pradesh assembly elections are due in November and the Election Commission is likely to announce the dates later this month. However, the political climes will heat up in the state as both Priyanka Gandhi and PM Modi will be addressing rallies around the same time.

Congress hopes to claw back to power

Notably, this is Congress’ first election in the state without Virbhadra Singh, who served 6 terms and 21 years as the 4th Chief Minister of Himachal Pradesh. The party has also witnessed veterans in the state jumping ship to the BJP. Recently, Harsh Mahajan, working president of the Himachal Pradesh Congress Committee, quit the grand old party to join BJP. Mahajan’s exit is crucial as he played a big role in strengthening the party`s organisation at the grassroots for over a decade.

Before Mahajan, the other prominent leader who parted ways with the party was five-time legislator Ram Lal Thakur. Pratibha Singh, the widow of Virbhadra Singh, has been serving as the Himachal Pradesh Congress Committee (HPCC) president since April but the leadership crisis in the state is quite evident.

Despite the losses, Congress is hoping to claw back to power given the trend of alternate governments in the state since 1985.

Corruption, unemployment and poor performance of the government will be among the major issues in the forthcoming Assembly elections, said AICC spokesperson Alka Lamba.

Meanwhile, Prime Minister Narendra Modi will also be in the state to address big rallies ahead of the state assembly elections. PM Modi will address a rally in Chamba on October 13, while Priyanka Gandhi Vadra will be in Solan on October 14.

Though this will be Congress’ first rally in the state, BJP has already held two rallies at Mandi and Bilaspur, both addressed by PM Modi. The PM also attended the Rath Yatra of historic Kullu Dusshera. While Congress is hoping to form its government in the state this time, PM Modi aims to achieve ‘Mission Repeat’ with another 5-year term for BJP.