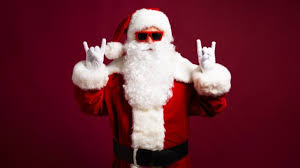 There are a few things we automatically associate with Santa Claus: A big belly, a bag full of gifts, an army of reindeer, and, above all, a vividly bright red-and-white fur suit. The outfit is ubiquitous around the holidays, from shopping mall displays to advertisements to drunken Santa Con gatherings. But while it’s a look firmly associated with Christmas, that was not always the style the character wore.

When St. Nicholas first appeared in the United States, he was decked in religious garb. The earliest known image of the character in the country, commissioned by New-York Historical Society founder John Pintard in 1810, shows him in ecclesiastical robes, with a gaunt appearance and bald head that’s far from character he would become. This shifted with the publication of Washington Irving’s satirical Diedrich Knickerbocker’s History of New-York and Clement Clarke Moore’s “A Visit from St. Nicholas,” which presented the character as more of a friendly, fun-loving merchant, or “pedlar just opening his pack.”

Though Moore’s version would shape the character for decades, the color of his outfit was not specified, leading artists to have wide-ranging takes on his dress, from the working-class duds of an 1838 painting by Robert Walter Weir to a three-cornered hat vest in an especially odd pamphlet created by P.T. Barnum. When the color of his outfit was shown, it would usually be tan or some kind of brown.

But, beginning in 1863, illustrator Thomas Nast began drawing the character for Harper’s Weekly, with the familiar rotund shape, plus furry robe and nightcap. Nast popularized ideas like the workshop filled with elves and the commitment to answering piles of mail from children. The huge circulation of the magazine and popularity of these illustrations (published every Christmas for more than 20 years) helped Nast’s version become the definitive one. The full-color illustrations of the character on the cover of Harper’s featured the red suit and would set the template for decades to come.

But the red suit didn’t immediately take hold, in part because Nast himself was not consistent. (He drew Santa in green on at least one occasion.) Holiday postcards through the second half of the 19th century show the character in robes of gold, green, and all variety of other colors. But over time, red became the default color, as other illustrators such as Norman Rockwell depicted the character throughout the 1910s and 1920s and stores and brands used the character in their advertisements. In the 1930s, Swedish artist Haddon Sundblom illustrated the character for Coca-Cola’s massive promotional campaign and put the finishing touches on the character.

Despite the widespread myth, the soft drink company did not invent anything about the character—but it did help make this specific red-and-white version the definitive one. The same red-suited, black-belted, rotund character would be used in the company’s advertisements for three decades, helping lock in that as the definitive appearance.

As researcher Tom Glamon explains to BBC, Santa evolved over time, and so did his costume. “Father Christmas is an evolutionary creation, influenced by folklore, legend and religion,” he said. “He didn’t spring to life at a certain time, fully formed and wearing a red and white suit.” And if you’re looking to have some laughs courtesy of the big man in red, here are The Most Hilarious Letters to Santa of All Time.