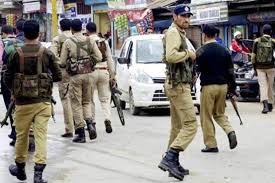 SHOPIAN, SOUTH KASHMIR:
An encounter is underway in Shopian district of South Kashmir. After an intelligence tip-off, security forces launched a pre-dawn anti-terror operation in Shopian.

The joint operation is being carried out by the police and army in Heff Sheermal village, where armed terrorists are present.

As the troops zeroed in and launched an offensive, the terrorists opened fire, leading to major gun battle in the village. Officials sources say, three to four terrorists are still hiding in the wooded area.

“The operation was planned by the police based on a specific information about a hideout in the orchards of Sheermal,” said the police chief of Jammu and Kashmir, Dilbag Singh.

This is the second encounter in the Valley in the last 24 hours. Yesterday, three terrorists of the Al-Badr group were killed after a day- long operation at Hapatnar area in Budgam district. The terrorists were residents of Shopian.