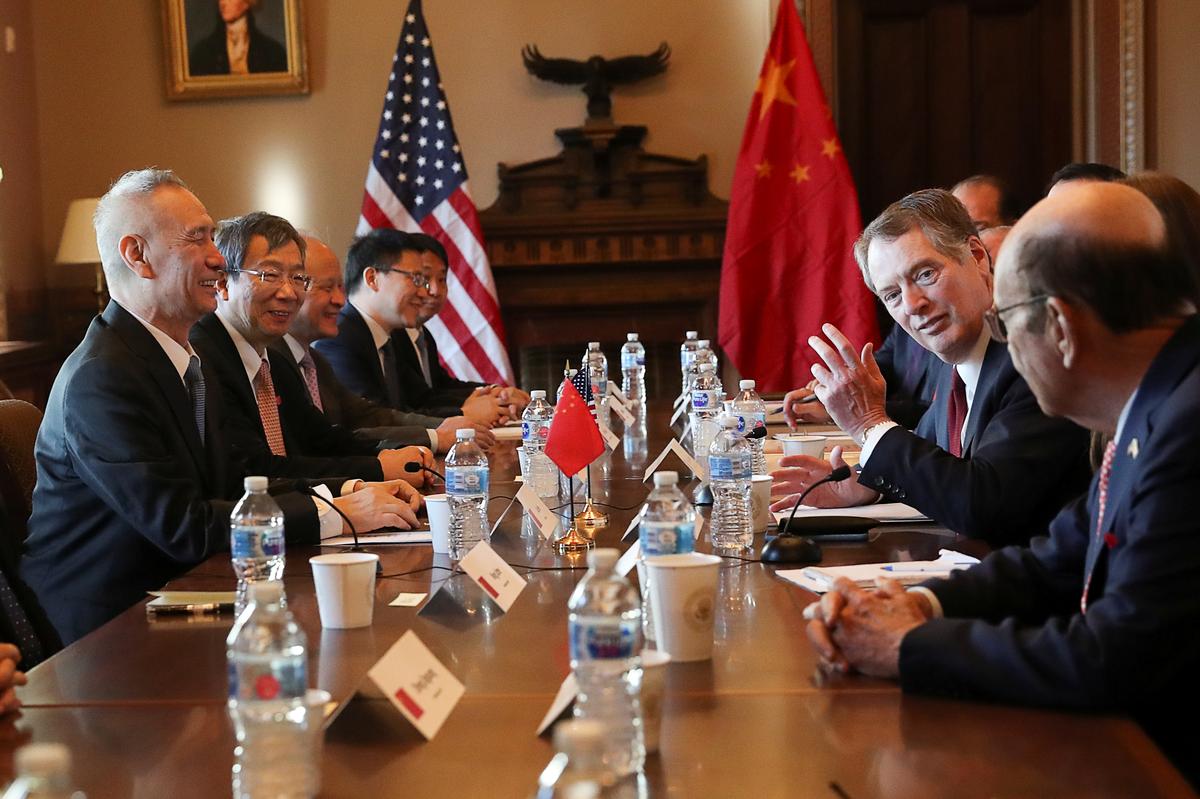 WASHINGTON:
The United States and China opened a pivotal round of high-level talks on Wednesday aimed at digging out from their months-long trade war amid deep differences over Chinese practices on intellectual property and technology transfer.

Cabinet-level officials, led by Chinese Vice Premier Liu He and U.S. Trade Representative Robert Lighthizer, gathered in the Eisenhower Executive Office Building next to the White House, with about a month to reach a deal before a March 2 U.S. deadline to increase tariffs on Chinese goods.

During a photo opportunity at the start of the scheduled two days of talks, Lighthizer, Treasury Secretary Steven Mnuchin and other top Trump administration officials sat silently across a long table from their Chinese counterparts, ignoring a reporter’s questions.

After a few minutes, Lighthizer broke the silence with joking small talk about table positioning and appearing in photographs from the meeting between U.S.President Donald Trump and Chinese President Xi Jinping in Argentina last year.

The talks began two days after the United States charged Chinese telecommunications company Huawei Technologies Co Ltd and its chief financial officer, Meng Wanzhou, with conspiring to violate U.S. sanctions on Iran by doing business through a subsidiary it tried to hide.

Meng was arrested in Canada on Dec. 1 at the request of the United States, which is seeking to have her extradited.

The talks in Washington are expected to be tense, with little indication so far that Chinese officials are willing to address core U.S. demands to fully protect American intellectual property rights and end policies that Washington has said force U.S. companies to transfer technology to Chinese firms.

The U.S. complaints, along with accusations of Chinese cyber theft of U.S. trade secrets and a systematic campaign to acquire U.S. technology firms, were used by the Trump administration to justify punitive U.S. tariffs on $250 billion worth of Chinese imports.

Trump has threatened to raise tariffs on $200 billion of goods to 25 percent from 10 percent on March 2 if an agreement cannot be reached. He has also threatened new tariffs on the remainder of Chinese goods shipped to the United States. China has retaliated with tariffs of its own, but has suspended some and is allowing some purchases of U.S. soybeans during the talks.

They have emphasized steps already taken, including reduced automotive tariffs and a draft foreign investment law that improves access for foreign firms and promises to outlaw “administrative means to force the transfer of technology.”

China is fast-tracking that new law, with the country’s largely rubber-stamp parliament likely to approve it in March.

A crucial component of any progress in the talks, according to top Trump administration officials, is agreement on a mechanism to verify and “enforce” China’s follow-through on any reform pledges that it makes. This could maintain the threat of U.S. tariffs on Chinese goods for the long term.

As members of the Chinese delegation left their hotel near the White House, a small group of Chinese protesters held placards highlighting various grievances against the China’s government, including the unfair taking of properties.

Some business groups watching the talks were tempering expectations for a breakthrough. With a month to go before the deadline, it was unlikely that either side would put their best offers on the table in the next two days, said Erin Ennis, senior vice president of the U.S.-China Business Council.

“I don’t think there’s going to be any big outcome,” Ennis said of the talks scheduled for Wednesday and Thursday. “Hopefully they make some good progress that will set them up to be able to get to completion at the end of the 90 days.”

But the Chinese side would likely have to bring to the table a new offer that goes significantly beyond its previous offers to significantly increase purchases of U.S. goods, including soybeans, energy and manufactured goods.

People familiar with the talks said manufactured goods, a key priority for the Trump administration, were among the largest components of Chinese purchase pledges aimed at significantly reducing the U.S. trade deficit with China. But here, too, there are “no guarantees” that Beijing would follow through on these pledges, one of the people said.