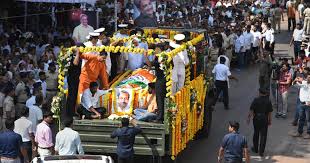 PANAJI: Manohar Parrikar, Goa Chief Minister and former Defence Minister, who had been battling pancreatic cancer for more than a year, died at his son’s home in Panaji on Sunday evening. He was 63. The announcement was made in a tweet by President Ram Nath Kovind, condolence messages poured in from political leaders across the board.


“Extremely sorry to hear of the passing of Shri Manohar Parrikar, Chief Minister of Goa, after an illness borne with fortitude and dignity. An epitome of integrity and dedication in public life, his service to the people of Goa and of India will not be forgotten,” President Kovind tweeted.

His body was kept at the Goa BJP office and the Kala Academy for people to pay their last respects to the leader. Mr Parrikar would be accorded a state funeral with full military honours this evening, according to the home ministry.

The central government has announced a day’s national mourning today, during which all schools and colleges in Goa would be shut.

Mr Parrikar’s health had been fluctuating for several days and worsened on Saturday morning. The former Defence Minister had been in and out of hospital in Goa, Mumbai, Delhi and New York since February last year. Last month, he was admitted in the Goa Medical College and Hospital near Panaji.

In January, the four-time chief minister had said he would “serve Goa till my last breath”. His partymen acknowledged him as their leader in face of Congress attempts to dislodge the government and accusations that the party has fallen below halfway mark in the state assembly.

Over the recent months, Manohar Parrikar had made public appearances with a tube in his nose, looking frail. He had turned up at the state assembly to present the budget, triggering Congress allegations that the BJP was parading him around despite his condition to save its government in the state.

After his death was announced on Sunday, political leaders from across party lines expressed their grief.

“I am deeply saddened by the news of the passing of Goa CM, Shri Manohar Parrikar Ji, who bravely battled a debilitating illness for over a year. Respected and admired across party lines, he was one of Goa’s favourite sons. My condolences to his family in this time of grief,” Congress chief Rahul Gandhi tweeted.

His party, however, once again staked claim to form the government in the state, saying that the BJP was in minority. The BJP-led coalition, that met held a meeting through the night, could not reach a consensus over the next Chief Minister.

Meanwhile, the BJP called a meeting late on Sunday to find his successor, news agency PTI reported. Union Minister Nitin Gadkari reached the state after midnight to hold talks with allies too. BJP legislator and the Deputy Speaker of the state assembly, Michael Lobo said Maharashtrawadi Gomantak Party (MGP) legislator Sudin Dhavalikar wanted to be the chief minister due to which the discussions came to a halt.

“Sudin Dhavalikar wants himself to be the CM, while the BJP wants that the leader of the alliance should be from their camp. We could not reach to any decision,” Mr Lobo told reporters outside a hotel after the night-long meeting.