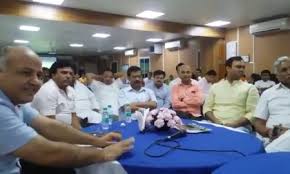 NEW DELHI: Delhi University Teachers Association (DUTA) Wednesday slammed the syllabus revision plans of the varsity and called the process of revising its undergraduate programmes as “thoughtlessly derived from a controversial and widely criticised Outcomes-based model prevalent in State-funded US universities”. While announcing the decision to revise the syllabus, the varsity said the process has been undertaken in the light of UGC’s Learning Outcome-based Framework (UGC-LOCF).

DUTA said the UGC’s LOCF itself is open to consideration, scrutiny and critique.

“The system is pushed by standard outcomes-based incentives (rewards and punishment). Recent attempts by the MHRD to restrict research, apply quantified performance parameters through a Tripartite MoU, push towards loan-funding and financial “self-reliance” also stem from this approach,”  DUTA said in a statement.

The Association also said the LOCF will invite greater interference from governments that will be tempted to dictate acceptable ‘outcomes’ for universities.

However, a statement from the varsity said “The revised curriculum will be expressed in terms of outcomes related to knowledge, understanding, skill, attitudes and values. It aims to foster quality higher education in academic research, contributing to society”.

The revised courses are scheduled to be implemented from the 2019-20 academic session. It is estimated that the revised courses, according to DU, ‘will benefit’ close to seven lakh undergraduate students who will be seeking admission in 2019 from Open Learning and regular streams.

The process of revision of undergraduate courses began on March 11, 2019 by inviting all Deans and Heads for a detailed consultative meeting.

“Consensus emerged on the need to revise the curriculum without any further delay. Participation of students in the curriculum revision process has also been ensured,” it said.