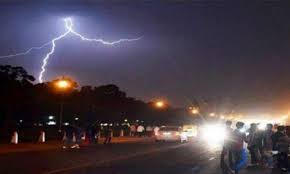 At least 39 people, including women and children, were killed and five injured in 12 districts of Bihar, when lightning struck them in past 24 hours.
The maximum number of deaths (eight) were reported from Jamui.

The figures of 39 dead due to lightning in the last 24 hours is maximum since the beginning of the year. On June 27, lightning had killed 27 people.

Eight deaths were reported from Jamui, seven from Aurangabad, four each from Banka, Bhagalpur and East Champaran, three from Rohtas, followed by two deaths each in Nalanda, Katihar and Nawada and one death each in Munger, Gaya and Arwal districts.

The youth was killed at Saraya ward number 7 under Govindganj police station, while he was working in the farm field.

“The state government has ordered ex-gratia payment of Rs 4 lakh each to the kin of those who lost their lives,” said an official of the disaster management department.

Indian Meteorological Department (IMD) officials said that lightning strikes in the state go up during the June-September monsoon season.

He said the state government had issued a training calendar for the whole year to sensitise people against natural disasters, which included flood, lightning, earthquake, heat and cold wave.

He added that the panchayat representatives had been trained of various dos and don’ts to be followed during rainy season, so that lives of people are protected against lightning.