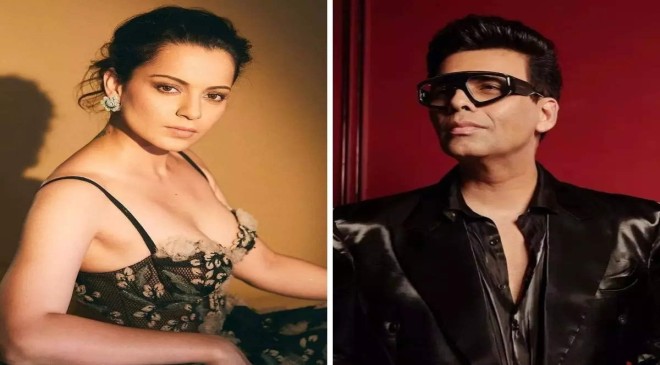 New Delhi: Kangana Ranaut is one of the most vocal actresses in the Bollywood industry and doesn’t shy away from making unpopular opinions. The actress, who has recently talked about the film ‘Brahmastra’ and the veracity of its box office numbers, has again taken potshots at it after Vivek Agnihotri on Monday reacted to the report that the film has crossed the ‘The Kashmir Files’ numbers.

The actress recently took to her Instagram stories where she wrote, “The audacity to belittle The Kashmir Files, a film made on Hindu genocide (and) also trying to ride on its success. The Kashmir Files was made in ₹10 crore…and now according to mafia minions Karan Johar film has beaten it brutally…Karan Johar ji aap kya cheeze ho yaar”.

Kangana further commented on the films performance and its post-pandemic model and wrote, “Post pandemic verdict model, especially invented for Karan Johar films… BTW (by the way) Thugs of Hindustan (2018) earned around ₹280 crore worldwide gross and its budget was also around ₹280 crore… Lekin (but) they didn’t spend on PR machinery. Nahi toh (otherwise) with the new KJo (Karan Johar) models, no film will ever flop. Hashtag Just Saying”.

She continued and in her last note made the box office and budget comparisons of the films’ Race 3′ and ‘Brahmastra’ and wrote, “Race 3 made in the budget of 180 crore made 300 crore worldwide same as Brahmastra which has entire North and South industry stars in it and made in 600 crore budget over 12 years…But the same tradeianalyst declared Race 3 all time disaster….Lekin Karan Johar ji ko special priveleges ki aadat lag gayi hai…so he invented a special model for himself”.

Here are the pictures shared by the actress: