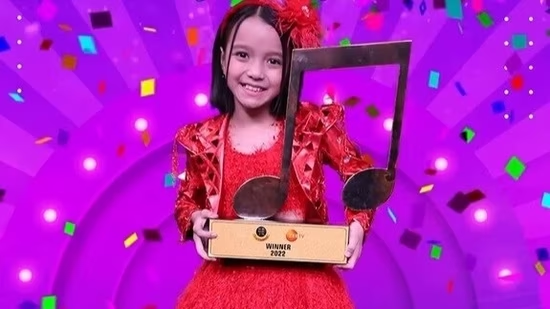 Sikkim’s Jetshen Dohna Lama has won singing reality show Sa Re Ga Ma Pa Li’l Champs season 9. She took home the trophy as well as the prize money of ₹10 lakhs. Harsh Sikandar from Jalandhar emerged as the first runner-up while Dnyaneshwari Gadage from Thane was declared the second runner-up during the show finale on Sunday.

The show was hosted by comedian-anchor Bharti Singh and had singers Shankar Mahadevan, Neeti Mohan and music composer Anu Malik as the judges.

Jetshen Dohna Lama is nine and had started singing from the age of three. Shankar Mahadevan used to call her the ‘Mini Sunidhi Chauhan’ on the show.

On being asked about what she wishes to do with the prize money of ₹10 lakhs, Jetshen told Pinkvilla, “I wish to buy a puppy and build a swimming pool at home.” On being asked if she wishes to stay in Mumbai and sing in films, Jetshen said, “First, I will go to Sikkim, complete my education and then I shall return and continue with singing.”

Earlier, boxer Mary Kom and footballer had also given a shout out to Jetshen. Mary Kom had shared pictures of Jetshen in November last year and had written on Instagram, “You are so lovely#jetshenlama @jetshen_dohna keep going… your voice is extremely excellent.” Footballer Bhaichung Bhutia had also appealed his fans to vote for Jetshen.

Jetshen told Indianexpress.com that she wishes to collaborate with Sunidhi Chauhan some day. She also expressed her wish to others from the industry.

Singer Ankush Bhardwaj, who helped kids in their performance on the show, also shared a post for Jetshen. He wrote, “Congratulations @jetshen_dohna_official our 2023 #saregamapalilchamps winner. God bless you chhoti Rockstar, Keep winning more and more hearts with you outstanding voice and unique style, now this is the beginning of your journey, way to go. And secondly waise to for me sab ke sab winners hain #winner #saregamapalittlechamps #2023 #talent #rockstar.”