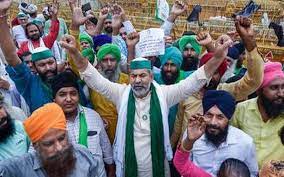 New Delhi: The Delhi Police had beefed up security as protesting farmers begin their ‘Kisan Panchayat’ agitation at Jantar Mantar today. Farmer unions had on Wednesday received a green signal to hold a protest at Jantar Mantar during the Parliament Monsoon Session, between 11 AM and 5 PM till August 9. Farmers are demanding the scrapping of the contentious agricultural laws.

Security has been tightened this morning at Delhi’s Singhu and Tikri borders, which are expected to see a huge footfall as farmers will gather from different protest sites and head towards Jantar Mantar. However, only a maximum of 200 protestors have been allowed till August 9 in the heart of Delhi with heavy security deployment in the area.

Samyukt Kisan Morcha (SKM), an umbrella body of farmers’ union which has been spearheading the protest against the farm laws, was asked to give an undertaking that all COVID-19 norms would be followed and the protest would be peaceful.

Meanwhile, Bharatiya Kisan Union (BKU) leader Rakesh Tikait demanded that the roads near the protest sites be opened up to ease troubles of locals. “The roads near protest sites that have been closed by authorities should be reopened to ease troubles of the local people. No farmer would go to Delhi secretly. We will stick to the permitted protest at Jantar Mantar,” he said.

A batch of farmers from Karnataka led by their leader Chukki Nanjudawamy also reached Ghazipur border on Wednesday to show solidarity with the ongoing movement.

Hundreds of farmers are encamped at Delhi’s Singhu, Tikri and Ghazipur borders since November 2020 with a simple demand – roll back the new farm laws. They have been protesting against the Farmers’ Produce Trade and Commerce (Promotion and Facilitation) Act, 2020, Farmers’ (Empowerment and Protection) Agreement on Price Assurance and Farm Services Act, 2020 and the Essential Commodities (Amendment) Act, 2020 and demanding a new law made to guarantee minimum support price (MSP) for crops.

However, the government, which has held 11 rounds of formal dialogue with the protestors, has maintained that the laws are pro-farmer.